This is a reminder for those of y'all attending this year's NTRPGCon (North Texas Roleplaying Game Convention). Registration for games opens up late tomorrow night (Thursday night/Friday morning) at midnight. Some games fill up quickly, so if you snooze, you lose!

In addition to having a vendor booth, I'll be running five games this year: two new dungeons of my own design (Dungeon of Dracula and Temple of Tehemot), as well as a more chaotic version of the classic Caves of Chaos (don't worry if you've played Keep on the Borderlands before, this version will have some surprises).

Plans are always subject to change, and life has a habit of getting in the way, but here is a list of things I hope to complete in 2016.

At least one new Swords & Six-Siders Adventures, hopefully several of a variety of levels.

Laser-Swords & Six-Siders game - bringing the fun, simple game-play of S&SS to a more sci-fi setting. Grab your laser-sword and blaster, and board your star-fighter to battle the evil forces of the Galactic Horde! Explore the abandoned(?) temples of an ancient religion to unlock mystical powers long forgotten. Raid the hideouts of infamous Crime Lords for that special weapon you'll need to blow up the Galactic Horde's latest planet-killer.

One or more new adventures for "classic" RPGs.

A "trollish" edition of S&SS.

A dungeon-crawl card game that plays like a boardgame (using only cards & a 6-sider). 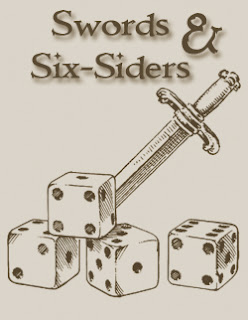 A S&SS random dungeon generator, along with many other useful resources, is available HERE.

Wizardawn's site provides a lot of cool resources for a wide range of old school fantasy RPGs, so make sure to check it out!
Posted by Unknown at 9:11 AM 5 comments: